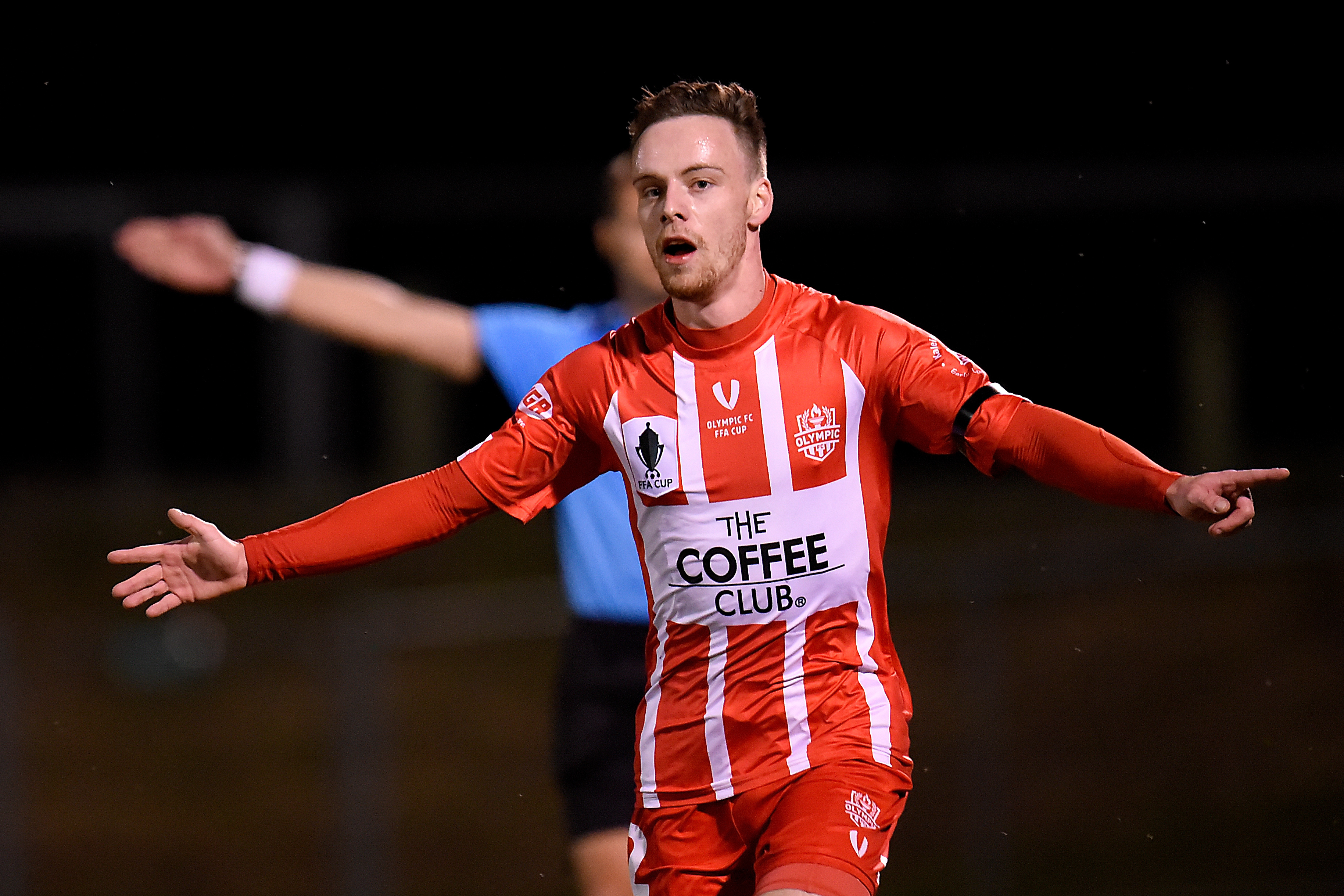 BRISBANE, AUSTRALIA - AUGUST 21: during the Round of 16 Westfield FFA Cup match between Olympic FC and Adelaide United on August 21, 2019 in Brisbane, Australia. (Photo by Patrick Leigh Kearney)

Olympic FC’s FFA Cup 2019 run comes to an end in the round of 16 after a 3-2 defeat to Adelaide United at Perry Park on Wednesday.

The game saw Olympic come back from behind twice, before falling to a late George Blackwood penalty.

Adelaide opened their account in the 10th minute, academy graduate Al Hassan Toure breaking in behind the Olympic defence to finish past Brandon Cuminao.

This was quickly countered by Olympic, Costa Psaros hitting back in the 12th minute after racing onto a lobbed through-ball from Matt Mundy to rifle the ball into the top left of Paul Izzo’s net.

Toure grabbed his second goal of the game to reclaim Adelaide’s lead in 27th minute, Michael Marrone squaring the ball across goal for a far-post tap-in.

Adelaide kept their lead heading into the half, but momentum quickly shifted once play resumed.

A dominant spell of possession and a plethora of early second-half chances were rewarded in the 63rd minute when referee Chris Beath blew a penalty in Olympic’s favour, Adelaide’s Vince Lia called for a handball in the box.

Substitute Chris Lucas made no mistake from the spot, sending goalkeeper Izzo the wrong way. 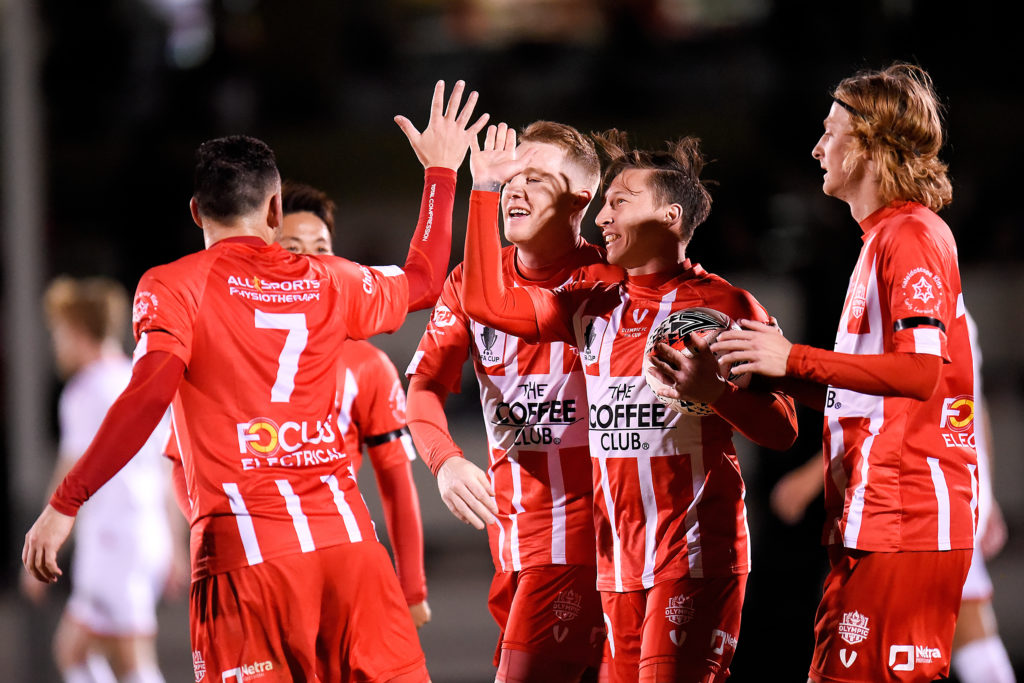 The game remained poised, either side looking a chance to snatch a winning goal.

Fortune swung in Adelaide’s favour, Matt Mundy alleged to have brought Riley McGree down in the box. Blackwood stepped up and converted the penalty, giving the visitors the lead in the 84th minute.

Olympic pushed until the end – a late chance falling to Lucas a chance at redemption for the hosts – but it wasn’t to be, Adelaide United securing a place in the FFA Cup Quarter Finals.

Despite the loss, Olympic Head Coach Ben Cahn hailed his side’s performance against their A-League opposition.

“Ultimately, I’m just really proud of everyone. I think we worked really hard, and we created a lot of chances,” he said.

“I think we at least deserved the opportunity to take that to extra time. But, that’s football, and Adelaide are a good side. Good luck to them in the next round.”

It was a well-matched game, with neither side looking out of place – a point Cahn made speaking post-match.

“One of the messages that I wanted to be clear to our players was that the difference isn’t that big,” he said.

“Obviously they’re full time, but the gap in ability isn’t that big, and we tried to stress that all week. 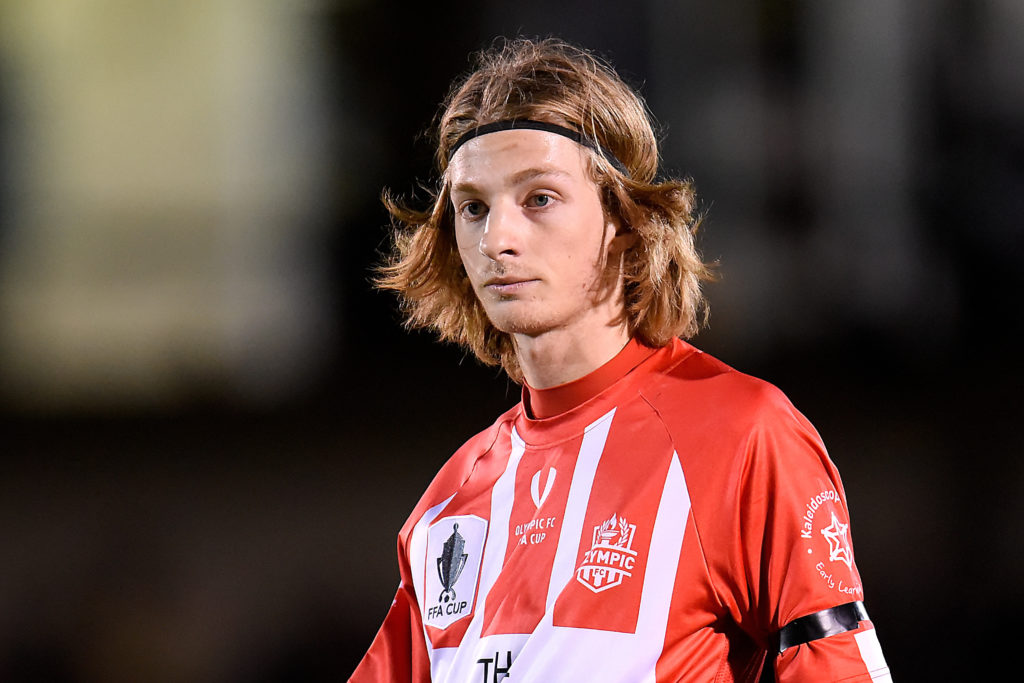 “Seeing people like Jez (Lofthouse) step up and have that impact on a game will obviously give him confidence, and obviously draw some more attention.

“He was incredibly unlucky not to see that shot where he turned (Jordan) Elsey inside out go into the top corner.”

Wednesday’s match was Olympic’s second-ever foray into the FFA Cup Round of 16 – last reaching that stage of the competition in 2014 with a 3-1 defeat to Central Coast Mariners.