Brisbane Olympic Football Club was established in 1967. It started life as Pan Rhodian FC, affiliated with the Queensland Soccer Association and playing at Pineapple Park, a field behind the Pineapple Hotel near the Gabba. The first president was Tom Carnavas and the first coach was John Tsombaras. The first of many fundraisers was a BBQ at the Nicolou residence in Louisa Street, Highgate Hill.

The following year (1968), Pan Rhodian FC applied to join the Queensland Soccer Federation. As a condition of joining the Federation, the name of our club needed to be changed and the name ‘OLYMPIC’ was adopted by mutual agreement. We started with one team and were placed in Division 8. The main fundraising activities were backyard BBQ’s where up to 200 supporters and guests would get together and talk all things football, eat, dance and enjoy themselves. The sale of doubles at our games also provided much needed financial support. Our main rival in the late 60s was a club called Dnipro, established by supporters whose cultural background was Russian.

In the early seventies we moved from Pineapple Park to Dutton Park. From here began the long climb from Division 8 to Division 1, which we were promoted to in 1979. Each year the club topped its division and was promoted up to the next division, subject to meeting QSF requirements. We formed a reserve grade, a youth sub-committee and even had a cheer squad. The facilities at Dutton Park consisted of two small dressing sheds and an extremely small canteen. To provide more space we managed to acquire a large caravan which had been converted into a canteen (the process of getting this van to Dutton Park was a comedy of errors – a story for another day).

Fundraising activities expanded to include dances, cake stalls, stalls at local festivals (the largest of which were the Spring Hill Fair and the Stanthorpe Apple and Grape festival), and raffles. Olympic House (Kafenion) was opened in Boundary Street West End. This served as a coffee shop, function centre and meeting place. In those days sponsorships were difficult to get. The most we could hope for was for some kind soul to sponsor the playing outfits for a few hundred dollars. 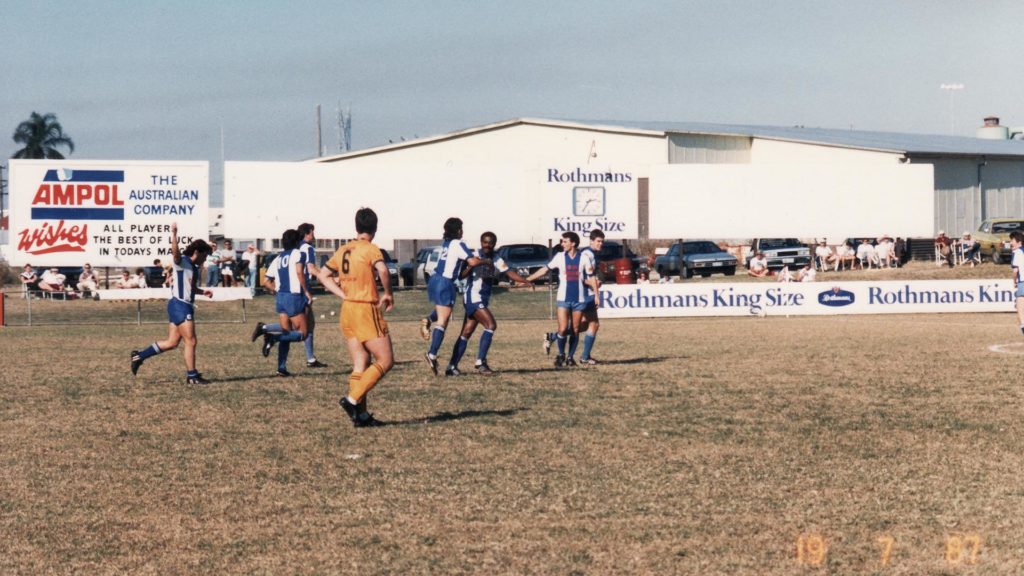 The Move To Goodwin Park

When St. George (formerly HELLENIC) folded in 1982 we moved from Dutton Park to our current home at Goodwin Park. Goodwin Park was initially shared by St. George and South Athletics. The lease was eventually solely owned by Olympic after 15 dedicated committee members and supporters guaranteed the loan to buy-out the Athletics club.

From 1978 our fundraising included the proceeds from the annual Paniyiri at Musgrave Park. The club has participated in every Paniyiri since this event started. In the first few years one of the highlights was the mini soccer tournament between the Greek Community Committee and “friends” and the Olympic Committee and “friends”.

The highlight of the 1980s was Olympic’s win over Brisbane Lions in the QSF Grand Final in 1983. The Ian Brusasco Cup is probably the last major piece of silverware won by the Olympic senior team in this decade. Fortunately our juniors and women’s teams have done us proud since then.

In the early eighties Olympic was promoted to the first State League in Queensland. However, the league folded after a few years because of the costs associated with travelling a state as big as ours.

The period from the mid-’80s to the mid-’90s saw a steady growth in the number of teams and players representing our Club. Junior teams increased to twelve and a second women’s team was formed. Substantial works were performed at Goodwin Park, including the relocation of the main field, building our first grandstand (constructed by Tony Nicolaides), upgrading the lighting, reconfiguring the grounds so that we had four fields to accommodate both junior and senior teams, locating the entrance and road into the field, resurfacing the fields in stages, and adding about a foot of ash along with sand and top dressing to improve drainage. Some might even remember the road that ran down where the main field is now located.

The Olympic kafenion was moved from West End to Goodwin Park. The canteen at Goodwin was converted to suit a kafenion style venue.

Finally the main bank loan was paid off, the guarantors released from their obligation and thoughts turned to the construction of a new clubhouse. 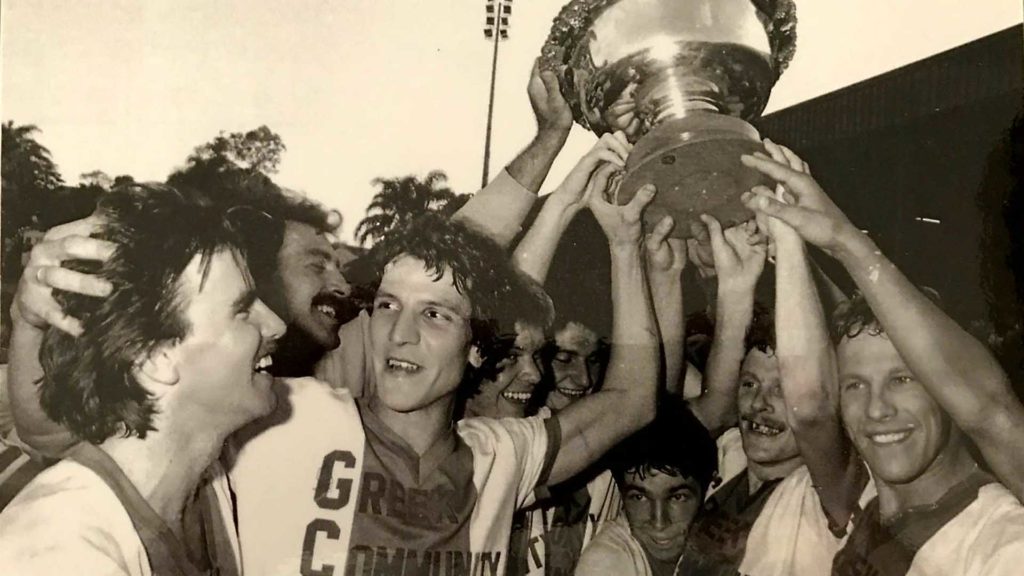 The club entered the new century with the appointment of our first female President, Koula Fotinos (2000) and the establishment of The Australian Hellenic Sports and Cultural Committee (TAHSCC) in 2003. This committee was established to seek government funds to build a new sporting complex at Goodwin Park. It was a joint venture between The Greek Community of St. George and Olympic FC. The venture began in 1999 but final private and state funding wasn’t secured until 2006. The new complex was eventually completed and officially opened at the start of the 2008 season.

Olympic spent 17 years struggling to attain promotion back into top flight of football in Brisbane. From 1990 to 2007, Olympic was playing its football in Division 1. However in 2007, under the coaching stewardship of Bobby Hamilton and his assistant Jim Bellas, Olympic finally secured promotion into the Brisbane Premier League by finishing second to North Pine and winning a playoff final against relegated Premier League side Wynnum Wolves.

In 2013, Olympic has taken the decision to participate in the new National Premier Leagues competition (another state-wide competition, this time run and supported by Football Federation Australia) which includes both senior and junior football.

The club has grown substantially since 2003 under current club President Peter Ioannidis. In 2003 the club had a total of 190 registered players; by the start of the 2013 season, this has grown to a playing roster of over 855 players between the ages of 3 and 50.